With massive utility-scale solar power plants producing power all over the UK, and indeed, all over the world, we thought this was a great time to take a look at some of the biggest and boldest of these projects. With continued, aggressive developments in the solar energy sector making solar power generation much cheaper than other sources of energy (like fossil-fuel-based energy), we are seeing an increasing number of solar farms popping up.

The most popular way to capture the sun's light for power is through solar farming, which is rapidly becoming one of the more favoured new investments by companies and individual investors alike. 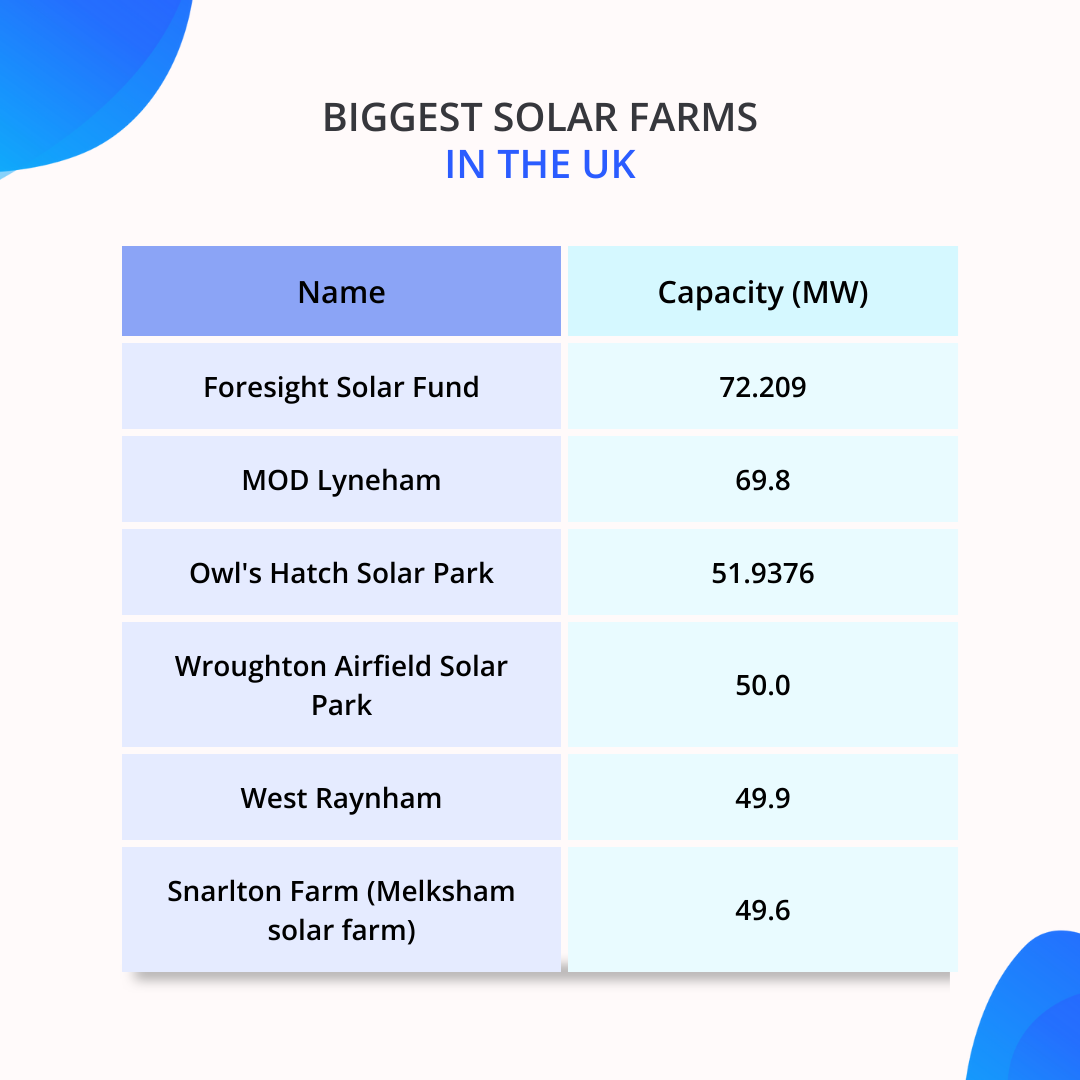 What are the biggest solar farms in the UK?

Foresight Solar Fund Limited ("the Company" or "FSFL") is a Jersey-registered, closed‑ended investment company investing in a diversified portfolio of ground-based solar PV and battery storage assets in the UK and internationally.

Shotwick Solar Park is the largest solar field in the UK as of 2022.

Just behind at number 2, the MOD’s first line of defence against rising energy costs is the massive solar farm in Lyneham.

This solar park could become even larger in the future. A spokesperson confirmed to the Solar Power Portal that the area “has the capacity to produce 86MW” should the 90-hectare site be expanded.

Approximately 250 acres of land are protected by this solar park, as well as 15,,460 tonnes of Co2 avoided.

One of the largest ground-mounted solar parks in the UK with a capacity of 50MW.

This park was redeveloped by turning the aircraft hangers on the defunct World War II airfield into a clean energy haven.

Another park built on a former airbase, the park has the potential to provide green energy to up to 14,000 UK homes per year.

Located in Norfolk, this park was completed in 2015 and has since been providing 49.9MW of solar energy to the area.

What is a solar farm?

Where is the biggest solar farm in the world?

With an overall power capacity of 2.25 GW spread over 14,000 acres, the Bhadla Solar Park in India is today the largest solar farm in the whole world. Pavagada Solar Park in Karnataka, known as the Shakti Sthala Solar Energy project is India's second largest and the world's third-largest solar power plant.

Mallard Pass Solar Farm is planned for 2238 acres of agricultural land just north of Stamford. This would be the UK’s largest solar farm.

A proposed new 600m-capacity eastern England solar farm - covering an area eight times larger than Hyde Park in central London - faces opposition on claims that it will take up too much farmland. Local communities are divided on the large-scale project. However, supporters argue the benefits of a large supply of green energy local to England outweigh any cons.

How many solar panels can I fit on 1 acre?

One acre of land can fit around 2,000 solar panels, depending on the type of panel.

Why get solar panels for your home?

You probably don’t have a spare hundred acres of land in your back garden for a solar farm. Not to worry - you can still benefit from reduced bills and green energy with your own home solar system.

Why get a home solar system? Put simply, your average yearly electricity bill could be reduced by up to 80%. In some cases, you could get rid of your energy bill entirely.

To speak to one of our specialists about solar for your home, click here.